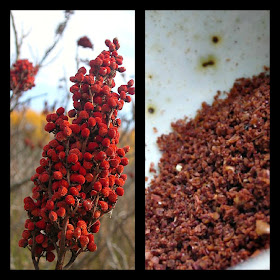 Ground sumac is a flavor catalyst known for its acidulant qualities. It is used in Mediterranean dishes and has a subtle astringent tartness that is less assertive than pomegranate molasses or tamarind paste. Ground sumac's aromatic profile is a flavor subtext in za'atar, a spice mixture that generally includes: thyme, oregano, marjoram, sesame seeds, sumac and salt. Sumac tempers camphoraceous notes found in the assertive green herbs which comprise za'atar. It does so with naturally occurring malic acid, a molecule found in sour fruits. When you see an "E" before a number on a food ingredient list you are looking at a malic acid indicator. Malic acid is commonly found in sour candy and is what puts the "tart" in Sweet Tarts (an interesting scientific fact for budding gourmands).

Sumac's flavor profile may be sour dominant, but its fragrance tells another story. Harold McGee describes sumac as "aromatic...with pine, woody and citrus notes." Spice master Ian Hemphill elaborates on sumac's fruity qualities which he describes as "a cross between red grapes and apple, with a lingering freshness." The combination of McGee and Hemphill's descriptions complete the flavor profile for sumac and make it easier to identify whether or not ground sumac is fresh. If your nose detects the teint of rancid oil you have likely encountered old ground sumac as a bit of oil is sometimes used to keep the spice from clumping together along with salt. Fruitiness is the dominant quality you will notice when first smelling ground sumac. The depth of fruitiness will vary depending on where the sumac was harvested and the conditions under which it was processed and stored. 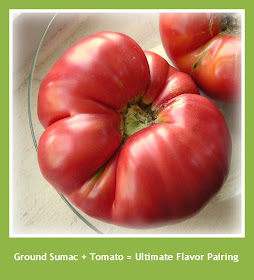 The tartness of ground sumac is immediately sensed when the spice is tasted neat. Sumac's fruity and pine-like qualities are best expressed simply; on a slice of fresh tomato. The malic acid in sumac makes the mouth water and intensifies the umami quality naturally present in tomatoes. This savory backdrop allows the pine-like freshness of ground sumac to express itself more fully, trilling the fruity aspects of the spice in an experience that is best described as a "flavor boomerang." 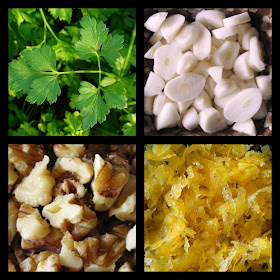 Ground sumac is a brilliant flavor catalyst in parsley pesto. Glass Petal Smoke's Parsley Pesto with Sumac utilizes a combination of lemon zest and ground sumac to temper the assertiveness of parsley and garlic. Parmesan cheese isn't an ingredient in this recipe, but it can be added for enhanced flavor. Parsley Pesto with Sumac is divine on hot buttered bread, as an addition to sauces or soup stocks, and in fish dishes.

Ground Sumac is sold by several spice purveyors including Penzeys.

Malic is derived from the word malus in Latin which means apple. The aroma of malic acid in ground sumac bears a resemblance to tart apple skin. The red color of the spice reflects the presence of anthocyanins, the same flavinoid molecules found in berries. When it comes to taste anthocyanins contribute an astringent sensation and are generally flavorless.