Geosmin and Petrichor: The Perfume of the Earth 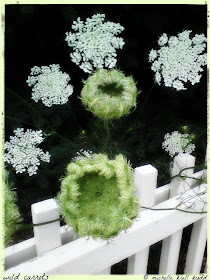 Most people know wild carrot as Queen Anne's Lace. The gnarled weedy beginnings of its flowers illustrate the plant's invasive nature, but when these flowers mature they are surprisingly beautiful. The mathematical precision of its white florets are as compelling as a computer generated fractal. The taproot of Queen Anne's Lace is fibrous, sizable and strong. Anyone who has ever pulled up these plants knows that resistance is part of the weeding game, but an interesting gift is bestowed upon the nose for the effort; the root-tinged aroma of geosmin that accompanies the smell of underripe carrots.

When exploring the story of geosmin one cannot avoid a spiritual encounter with the narrative of human terroir. According to the Abrahamic faiths of Judaism, Christianity and Islam we are all made from dirt and destined to return from whence we came. Whether you call it dirt, earth or soil, each are one and the same. This deceptively simple substance allows plants and livestock to flourish, which in turn provides sustenance at our tables. When we shed our mortal coil the earth welcomes our body back and transforms what remains into new life for organisms that will come to life in the future. Gardeners and farmers are particularly conscious of this fact and for them the smell of geosmin in freshly turned earth is the very essence of life. 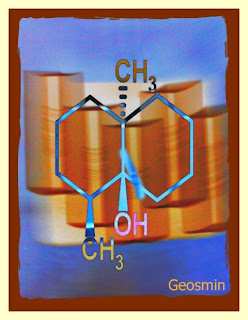 In the lab geosmin is known by its molecular name; Dimethyl-9-decalol. Geosmin present in the spore coat of actinomyces and streptomyces soil bacteria, which is released into the air before the first rain falls on dry earth, is known as petrichor. In this scenario geosmin is atomized like a perfume and lingers as a soil-water aerosol. In the Eastern tradition of attar making there is a natural perfume inspired by petrichor. It is created by distilling sun-baked earth with sandalwood. It is called Mitti Attar and resembles the smell of the first monsoon rain on parched soil.

It is no surprise that the mystique of geosmin has given birth to several perfumes built around this enchanting molecule. The Smell of Weather Turning by Lush is a handsome interpretation of geosmin expressed in petrichor. It is a slightly chilled fantasy of petrichor where geosmin is supported by oak wood, hay, beeswax, nettle, English peppermint, mint and Roman chamomile. It is a tad woody and the understated cooling aspects make geosmin, an assertive and cloying molecule, more nose-friendly. 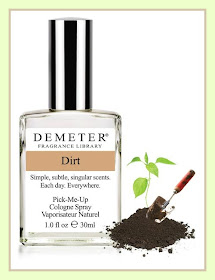 Demeter Dirt takes a different approach to geosmin-inspired perfumery with its simple yet hauntingly diaphanous architecture. It includes geosmin, methyl dihydrojasmonate (the floral compound known as Hedione) and transparent musk (the later supporting an uncanny effect that resembles the smell of "just washed" hair). Add a human pulse and Demeter Dirt transforms into a living entity with a subtle sillage capable of breaking your heart into a million pieces should the human censer suddenly disappear. For hardcore geosmin lovers who don't care for olfactory window dressing there's Demeter Beet Root. It smells like its name and has a sweet rouged quality that tempers geosmin with a vague hedonic quality. 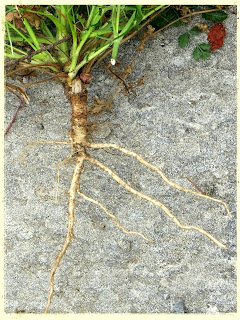 If the idea of wearing a geosmin inspired fragrance doesn't resonate with your notion of haute perfumery there's good news. It's July and wild carrots are in season. Now is the perfect time to give a sturdy stalk of Queen Anne's Lace a good yank* and have yourself a sniff or two. Don't be shy. You can take a stealth sniff of the aromatic taproot when no one is looking and pretend you're a naturalist.

Composer Adam Neal Scott wrote Petrichor, an experimental ambient music composition. It can be heard in its entirety and downloaded for free online. Listen to it on your i-Pod if you decide to go wild carrot hunting and indulge in a multisensory experience of your own making. P.S. Glass Petal Smoke recommends making a donation when you download Scott's music.

Geologists I.G. Bear and R.G. Thomas coined the term Petrichor in 1964. It can be found in their paper, "Nature of Agrillaceous Odor."

Glass Petal Smoke highly recommends Dirt: The Ecstatic Skin of the Earth by William Bryant Logan. It is a scientualist's delight and will make you think before you step on the ground.

The best Mitti Attar I've ever smelled is sold by White Lotus Aromatics. It is a seasonal product so you'll need to check on its availability.

The Smell of Weather Turning can be purchased at the LUSH website. It is available in a variety of sizes and is currently available in liquid and solid form.

Demeter Fragrances are available in a variety of retail stores. You can order their fragrances directly from their website.

"Making the Case for Beets," is a must-read if you want to understand the role that geosmin plays in the flavor profile of beets. Kudos to writer Susan Russo who has some interesting things to say on Food Blogga. You can follow Susan on Twitter.

You can read about Hedione and other marvelous aroma molecules in this article from the February 2009 edition of Chemistry World.

Sarah Gordon is the artist that created the painting for The Smell of Weather Turning for LUSH.

Photo of the wild carrot taproot is from Jone's Farmer Blog.  Rights revert back to the site.

*If you decide to pull up a wild carrot or two make sure to wash your hands afterwards as a chemical component found in its leaves reacts with sunlight (a reaction known as phytophotodermatitis). Phytophotodermatitis is also caused by the molecule bergapten which is removed from Bergamot essential oil in IFRA-compliant perfumery.
Michelle Krell Kydd at 12:00 AM
Share
‹
›
Home
View web version